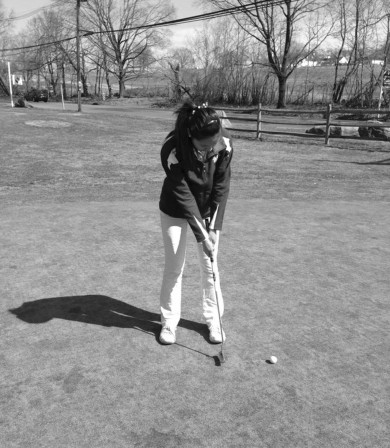 Fore! Watch out for the the JP Stevens golfers, because like their clubs, this team is swinging straight for success. In the past, the JP Stevens golf team has been known for its consistent, competitive performance throughout the entire season. At the last GMCs, JP placed first in the Individual Boys contest and placed second and seventh in the Individual Girls bracket. But like always, a new season brings along new changes and new endeavors. In order to maintain its good reputation, several key players, including seniors Sophia Chen and Kevin Li, have stepped up to lead the team to another successful season, along with this year’s coaches, Coach Canova for the boys’ team and and Coach Savulich for the girls’.

The golf team plays at the Plainfield West 9 golf course, the same course where many professional golfers came to play during the 2011 Barclays PGA (Professional Golf Association) Tournament. Currently, the girls’ team is 6-0 with wins against teams such as Edison High and South Brunswick. The boys’ team is 2-3 and boasted a score of 187 against Edison High’s 195. Both teams are also preparing for rigorous matches later in the season, particularly against Metuchen and Westfield. The Metuchen’s boys’ team is an undefeated 6-0, and Westfield’s boys’ team is 7-2.

Golf emphasizes a greater focus on improving one’s own game more than any other sport does. Senior Sophia Chen, who has been on the team since freshman year, says, “If golf has taught me anything, it would be patience. If you lose patience in golf, your entire game is over. If you learn to stay calm and deal with yourself, you become a better player and person.” And to those who misjudge golf as a sport only enjoyed by “old timers,” Sophia retorts that golf is not only helpful in the professional world, but it is also a challenge that takes a great amount of skill and focus to master. Currently in midseason, the JP Stevens golf team is looking forward to a successful season full of competitive matches, personal skill improvement, and a potential shot at the GMC finals.