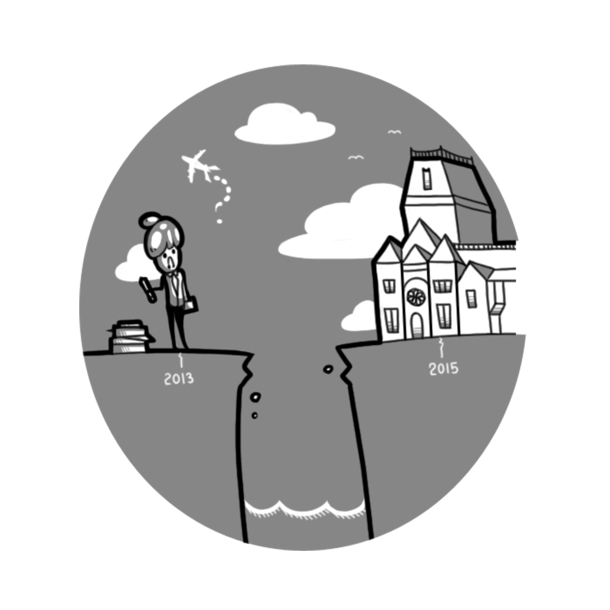 As the school year enters its final stretch, twelfth graders around the nation are looking forward to life after high school. For many seniors, this includes attending college. While some students anticipate going to college with excitement, others address their acceptance letters with overwhelming exhaustion. Sure, these students want to attend college — just not yet.

As high school teenagers who will eventually become college students, we have enormously high expectations to live up to. Therefore, we might be apprehensive about beginning this new phase of our academic careers. What many of us don’t know, however, is that a growing number of American teenagers is taking a yearlong break from textbooks, homework, and exams in what is known as a “gap year.” Instead of beginning college immediately after high school, these students take a year off to pursue other interests on their own. Possibilities include swimming with dolphins in Greece, volunteering at an AIDS awareness center in South Africa, jetting off to London as a fashion intern, or exploring Europe’s rich history and fascinating culture for either educational or personal purposes.

In the past, students have used gap years for energizing their brains’ batteries and for exploring unique opportunities related to their future careers — not for sitting around and playing League of Legends or MarioKart all day (as one might expect). Dedicated students take this opportunity to explore other cultures, work on individual projects, and pursue educational interests that may correspond to their major. For example, a potential medical student joined the Peace Corps during her gap year and was able to perform first aid and assist doctors in treating sick patients. More likely than not, taking a gap year will prove more productive than directly entering college freshman year, simply because of the various once-in-a-lifetime experiences and emotional growth “gappers” can undergo. If you are given the extraordinary opportunity of taking a gap year, go for it. You’ll be a much different student, and odds are you’ll be a better person, too.

Despite the advantages of taking a gap year, the act of doing so still seems bizarre to many American students. Some believe that anything delaying the goal of earning a degree isn’t exactly enticing. This is understandable, considering that it takes more than six years, on average, for an American student to earn a degree. However, colleges and universities are increasingly supporting — and even encouraging — the idea of a gap year by granting admitted students a year-long deferral. The gap year program, which originated in the United Kingdom in the 1960s, is now being endorsed by well-known institutions of higher learning such as Princeton University and Harvard College. Despite this recommendation by such prestigious colleges, parents worry that a short-term break will derail the futures of their “gappers” into overextended detours. Yet this is largely a myth: in a random survey of 280 “gappers,” 90% of them advanced to their promising futures in college. By simply planning for college before or during their year-long hiatus from academics, students can take the time to consider what they aim to pursue in the future instead of staying plagued by uncertainty about their major during the rest of their college years.

An extra year for relaxed yet applicable studying may be just what some students need to take on the rigorous courses they will pursue in the future. A gap year can allow a student to gain financial assistance or help a family business, or perhaps even launch a new one. While taking a year off after high school alleviates the pressure of classes, homework, and finals, it also energizes students for college the next fall. More importantly, a gap year may be just what is needed to pursue self-development and growth, bridging the transition from teenage to adult life. It’s no wonder that being cooped up in a formal education system for thirteen years doesn’t work miracles for our maturation and for our consciousness of global issues. Instead of attending college directly after high school, we should consider a year-long voyage of self-discovery — not only for relieving our physical and mental health, but also for creating unforgettable memories by embracing unconventional methods of education.