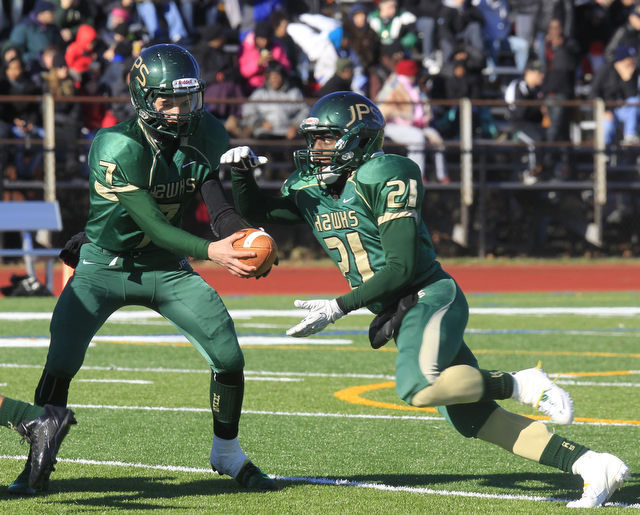 “It’s not how you start but how you finish.” This mantra has allowed countless teams to rebound from difficult season beginnings and finish strongly, and the JP Stevens football team hopes to do the same. Although they started 0-5, they have been working harder each game and their confidence is steadily building up as the season progresses.

Part of the football team’s struggle lies in the tough match-ups; South Brunswick and Piscataway remain undefeated and are sitting at 5-0. South Brunswick currently ranks 36 in the state while Piscataway ranks 57.  However, our Hawks are never intimidated by their opponent’s intense level of play. What matters most to the players is learning from each game and improving on their weaknesses for the next week’s game. As offensive tackle Matthew Fredericks (11) stated, “This football team is a family. We work hard everyday to help each other get better. Our mantra is to ‘win the day,’ and so far I believe we have achieved that goal. We just have to keep moving forward as a team and we will accomplish anything.” This positive attitude is encouraged by Coach Bryan Holt and captains Ryan Daly (12),  Stephen Susan (12), Francois Ballou (12), and  Deandre Perkins (12), who act as role models for the other players, even when the score is not in their favor.

Moreover, individual talent is growing within this team as the players gain more experience and develop their skill set. Although Deandre Perkins, last year’s Defensive Player of the Year, continues to efficiently guard the team’s defensive line by recording four tackles, he is also performing well in his offensive game; Deandre ran 82 yards in just two games while also scoring two rushing touchdowns. Other players who contribute significantly to the team are Francois Ballou with 56 receiving yards, Luke Jacobi (10) with 274  total yards, and Karleek Sutton (12) with 130 total yards, one touchdown, and two defensive tackles.

These players have improved immensely and continue to do so throughout the season. The long practices and challenging games have strengthened a camaraderie among the players. As Stephen Susan (12) stated, “We learn from each other and try to build a bond that is unbreakable. We know that each game will not be handed to us, and we must work together to succeed.” The players recognize that they must learn from their mistakes and continue to work hard to achieve their goals. Coach Holt adds, “Our goal is to get better every day, and good things will happen.” With the tremendous amount of support from the JP student body, as demonstrated by the enthusiasm at the annual tailgate as well as the audience attendance at the team’s weekly games, the football team is eager to continue to “win the day”.