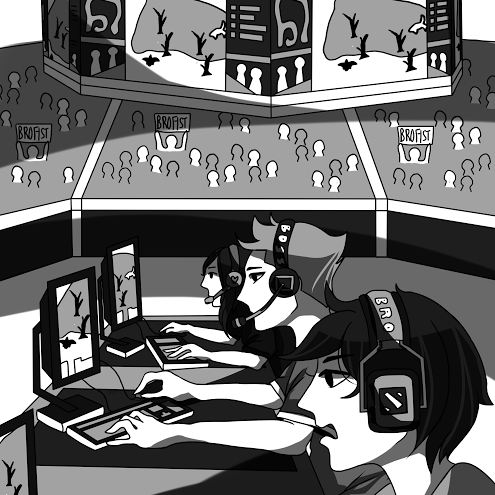 Ten years ago, people would have scoffed at the idea of someone playing video games for a living, though it’s a career path that many have fantasized about embarking on as kids. In recent years, however, this fantasy has become reality for a select number of people – people who can truly call themselves professional gamers. You may be thinking, “Great! But… how can someone earn enough money to live on by playing video games?” Well, you might be surprised when you hear about just how much e-sports (or professional gaming) has grown; most notably, a game called Dota 2.

Dota 2 is a team-based game for the PC in which two teams, containing five players each, square off against each other through the course of an extremely sophisticated match that would be impossible to comprehend for anyone without prior knowledge of the game. Due to its team-based nature, it has often been compared to team sports like football and basketball, which require teamwork as much as they require skill. Su-Leo Liu, a Dota 2 analyst and commentator, made an analogy to describe the game to newcomers.  “Dota is sort of a combination between [American] football and chess,” he said. “This is probably how I would try to explain Dota to someone who’s not familiar with it.” In fact, Dota 2 has practically become a sport in its own right; there are teams that have their own sponsors and apparel, there are are analysts commentating the matches, and there are players devoting their entire lives to the game.

But perhaps there is no better proof for Dota 2’s legitimacy as a sport than the tournament that the game’s developer (Valve) hosted during the summer of 2014, called The International 4. As the name suggests, this was the 4th iteration of the tournament, with an International being held every summer since 2011. 16 teams from around the world were invited to Seattle to participate in this once-in-a-lifetime event that was broadcasted on ESPN. The top 8 teams after the group stage would have the opportunity to play in the massive Key Arena, where the huge crowd generated a Super Bowl-like atmosphere. The deafening cheering only intensified the fact that there was a lot on the line. Exactly how much was on the line, though?

The total prize pool for the tournament began at 1.6 million dollars, a sizeable amount that would soon grow to unbelievable proportions. The previous year’s International had had a larger prize pool, at over 2.8 million dollars. However, for The International 4, Valve gave the community the opportunity to contribute to the prize pool with their own money, and the response was unimaginable: by the start of the tournament, the prize pool had ballooned to almost 11 million dollars, which was seven times the original prize pool. This is nearly as much as the pool for the NBA Playoffs, to give you an idea of what Dota has become compared to other sports.

Is this the turning point for the acceptance of e-sports in society? In the past, video games have been seen as nothing more than a pastime for kids. Parents have always despised video games, seeing them a waste of time for their kids. Nowadays, though, adults are involved in the professional Dota 2 scene as analysts or tournament coordinators. The fan support for the game is astounding, and proves that e-sports really do have a place in society.  Even professional NBA basketball player Jeremy Lin is an avid Dota 2 fanatic. He describes Dota as a “way of life” and believes in the game’s future, comparing it to poker. “Hopefully Dota 2 will kind of take a rise like poker did,” Lin says. “You saw that as just a card game and then it went big, started showing up on ESPN, and then the World Series of Poker became this big thing.”

One thought on “Evolution of e-sports”