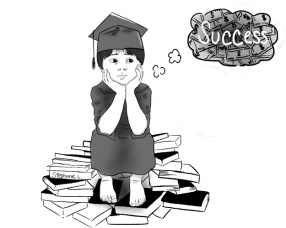 ON AUGUST 31, 2015, only days before the start of the new school year, CNN published an article by Hope King titled “The $2.5 billion high school,” detailing the success stories of three JP alumni. In the article, the academically-challenging and innovative atmosphere of JP is praised and highlighted as a reason for the success of these graduates. Yet it is unreasonable to assume that this competitive environment alone is a direct path to success. Although the unmistakably driven character of JP’s students can inspire success, other students have crumbled under the pressure because they could not and did not fit the typical definition of success.

In the article, King emphasizes the environment that nurtured the minds of Chieh Huang, Matt Salzberg, and Ken Chen, co-founders of Boxed, Blue Apron, and Nature Box, respectively—three startups with a combined value of more than $2 billion. The JP Stevens community of 15 years ago is described as “competitive” yet “collaborative,” with a merit-based social hierarchy. The same social hierarchy exists today. Students remain as intensely focused as ever, comparing schedules to determine the rigor of each other’s classes, and boasting about the number of extracurricular activities they participate in. This meritbased social hierarchy correlates the number of achievements someone has to the amount of respect he or she is given; the few students who manage to balance superb marks with significant volunteer work are almost venerated. It is clear that these three entrepreneurs were at the top of our school not only because they met this criteria, but also because this environment was conducive to success. In school, the main focus is to attain good grades. Once students graduate, this focus shifts to providing for themselves and finding personal success. The merit-based social hierarchy encourages students to try to achieve the conventional definition of success during their formative years, students are motivated to continue attaining their goals in the future. Although Chen, Huang, and Salzberg’s success could also be attributed to the rise in e-commerce and the debut of the internet during their years here, had they gone to JP Stevens in a different time period, their own personal work ethics and abilities would have enabled them to succeed in another field amenable to the circumstances. Because many students take away valuable life lessons and persistent determination from trying to climb up the social hierarchy of JP, a meritbased hierarchy can certainly be beneficial due to the similarity it holds to the real world.

Some qualifications to be at the top are listed as “the number of AP classes you took, your SAT score, and how many extracurricular activities you were in.” However, this shows the darker side of solely focusing on achievement. King’s article even states the “unspoken rule: Participation in clubs didn’t count unless you were president or on the executive board.” This intense competition to amass as many leadership positions as possible is simply absurd. Joining this rat race defeats the entire purpose of extracurriculars. Extracurriculars are means through which interests are supposed to be developed, not just numbers and words on someone’s college application. Even though many students approach participate in clubs without thought of college applications, the aforementioned competition is growing to be unhealthy. Is this type of academic-based social hierarchy really an improvement from a reputation determined by what clothes you wear or with whom you sit with at lunch? Of course, students are more prepared for the real world with a mindset already geared toward hard work, but the fine line between determination and overexertion is one that is too easily crossed. JP students may find real-world success because of this stringent social hierarchy, but this success comes at a high price.

Hope King makes a valid point that JP Stevens is an excellent school for having produced three brilliant innovators who have helped change the world in their own right. However, her article fails to grasp the entire reality of JP Stevens. The social hierarchy is definitely deserving of praise for its ability to prepare students for the reality of the adult world. Nonetheless, there are instances when competition serves to hurt rather than help, and not everybody is cut out for what many constitute as success. Though JP Stevens has produced countless talented alumni, it is important to remember that the distinctive experience alone makes the school worth much more than the moniker of the “$2.5 billion high school.”