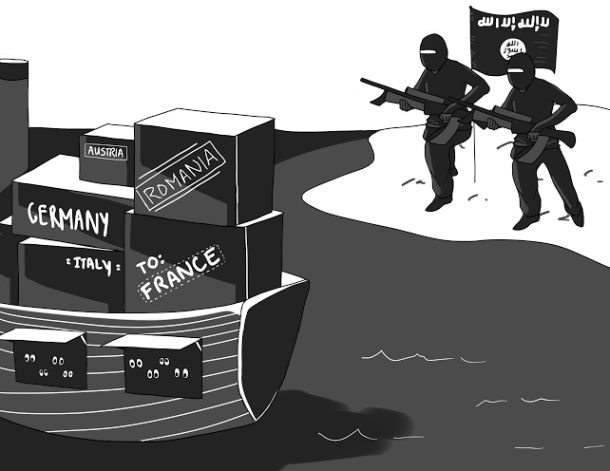 In the midst of a civil war, Syria is like a flame trapped in a glass dome: with Europe, the United States, and Russia watching as the smoke inside slowly suffocates hundreds of thousands of people. The total lack of action by the countries in the United Nations Security Council as well as their refusal to cooperate with refugees, has led to what our history books will call the Syrian Exodus.

Vetoes by Russian and Chinese members of the Security Council have blocked substantial headway on issues regarding war crimes, foreign intervention, and even some humanitarian aid, while surrounding states are left to pick up the pieces. Turkey, Lebanon, Jordan, and Iraq, just to name a few, are put under immense pressure to accept large numbers of migrants, especially when many bypass border registration, entering the country illegally and violating immigration laws. These countries lack the resources and funding necessary to support such a vast number of inbound refugees and experience economic instability as a result.  In a region where any sign of weakness can be interpreted as an invitation for terrorist groups such as ISIS, this is simply stoking the fire.

It is now, therefore, the moral and political responsibility of Europe to accommodate for the millions of displaced migrants. Of the millions displaced, two million are in Turkey, another million are in Lebanon, and of the remaining population in and around Syria four million are pleading for asylum in Europe. While Germany has agreed to harbor 500,000 refugees, this offer is accompanied by meager numbers from Britain and France. And though all members of the European Union have received asylum applications, most are unwilling and against offering further assistance. Naturally, they do not feel in any way responsible for the state of these refugees, and thus do not want to bear the consequences.

As if the deaths of 250,000 Syrians were not enough to warrant any humanitarian aid, over half of the migrants seeking refuge in neighboring states over Europe are children. Even non-theists are in support of Pope Francis’s call to treat the Syrians with dignity and understanding. In his first address to the American people alongside President Obama, the Pope urged the United States to consider the perspective of immigrants and refugees and aid them in both the Syrian crisis, as well as the country’s own immigration crisis. In response, President Obama raised the refugee resettlement quota to 15,000 and pledged to accommodate for at least 10,000 more. The insufficiency of such assistance is evident when this number is weighed against the number being taken in by European nations, whose GDP and territory pale in comparison to that of the United States.

While Russia will never harbor migrants, whom they consider “traitors” to ally President Assad, the United States also has a responsibility to either assist in quartering soldiers or giving aid on the front lines, with tensions rising as Russia lays its infantry, fighter jets, and artillery into play under the pretense of fighting ISIS. If not in granting asylum to refugees or aid to the Syrian Free Army, the United States can support the war efforts financially and strategically. Training Syrian soldiers would not only benefit their efforts against ISIS, but also to those against President Assad. A government of the free world and permanent member of the Security Council is perfectly capable and obligated to extend a helping hand to those fighting for their natural rights.

As for us, the future voters of the United States, we decide what path this nation will take. Therefore, the least we can do is learn more and sign the petition on mercycorps.org to tell Congress that the youth of America is behind the sovereignty of a people a million miles away. Whether our nation is in economic distress, or whether we have any affiliation with an issue putting the lives of 2 million people in jeopardy, it is, whether we like it or not, also our moral obligation to help those in need. As Pope Francis boldly stated,“We need to avoid a common temptation nowadays to discard anything which proves troublesome.” Are human lives troublesome to the United States?