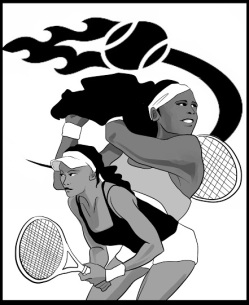 Misty May-Treanor and Kerry Walsh, Sonny and Cher, Rodgers and Hammerstein. All three of these famous duos have dominated their fields—Olympic beach volleyball, singing, and musical composition, respectively—because they have worked together. Likewise, when the Williams sisters, Venus and Serena, are on the tennis court, their combined abilities make for a doubles tennis team with a strength surpassed by none.

Individually, each sister has won more than 700 matches, a feat only a handful of professional tennis players, both male and female, have accomplished. Both sisters have been playing professionally for about 20 years, turning professional when they were only fourteen. Venus, the older of the two at age 35, has been ranked number one in the world three times by the Women’s Tennis Association (WTA), and was the first African American to earn this prestigious title. The title was well-deserved; Venus won the Gold in singles tennis in the 2000 Olympics and 22 overall Grand Slam tournaments. Serena, just fifteen months younger than her sister at age 33, accumulated a whopping 36 overall Grand Slam tournaments. Widely recognized as the best female singles tennis player in the history of tennis, Serena has been ranked number one in the world six times by the WTA. Not many people can return a 129 mph serve from Venus (Serena can, though; she has recently proved this multiple times in a heated match against her sister).

In the 2015 U.S. Open singles quarterfinal, the two sisters were pitted against each other for the twenty-seventh time. Although Serena won the battle, the two sisters united in the middle of the court in an embrace at the end. This bond has allowed them to succeed together as a doubles team as well; in total, they have accumulated thirteen Grand Slam tournament wins and four Olympic Gold medals! With the combination of their powerful and accurate shots, Venus’ volley skills, and Serena’s impressive backhand, it is no wonder why they have dominated as a duo. Many speculate when Venus and Serena will reach the end of their careers, especially as the sisters continue to age. Whether or not the Williams sisters continue their reign over the court or retire, they have left an indelible mark on women’s tennis and women across the world who aspire to be as strong and determined as they are.