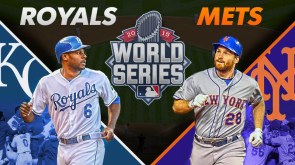 The World Series between the New York Mets and the Kansas City Royals was an exhilarating matchup with sudden twists and turns. Out of the five game series, two of the games went to extra innings (Games 1 and 5), and three of those games featured a comeback in the eighth inning or later (Games 1, 4, and 5). These insane highlights and the rare possibility of these events created a World Series that attracted an average of 14.7 million viewers per game, making this the most watched World Series in ten years. At the end of the stunning series, the Royals emerged victorious, winning four games to the Mets’ one game. On the way to winning the World Series, the Royals had a few pivotal moments which turned the momentum of the games and the World Series as a whole in their favor. Here are the top three moments from the World Series.

Game 1: Alex Gordon’s Home Run (Royals) Leading by one run in the bottom of the inning with two outs, the New York Mets looked as though they were on the verge of winning Game 1. The Royals were batting, and Alex Gordon came up to the plate. Gordon was only the ninth best hitter in the lineup, and he faced a pitcher who hadn’t given up a run the entire postseason. In a miraculous moment, Alex Gordon hit a solo home run and tied the game at 4-4, sending the fans at the Kauffman Stadium in Kansas City into a frenzy. The game went into extra innings, ending in the 14th inning with Ben Zobrist hitting a single and scoring a run, winning the Royals the game.

Game 4: Daniel Murphy’s Error (Mets) In the top of the eighth inning, with the Mets leading the Royals 3-2, Eric Hosmer for the Royals went to bat. The Mets pitcher, Jeruys Familia, with his devastating fastball forced Hosmer to hit a simple ground ball to second baseman Daniel Murphy. It seemed like the inning was over since it was a routine ground ball that was guaranteed to be an out, but the ball slipped under Murphy’s glove and into the outfield. Ben Zobrist scored from second base and Lorenzo Cain went to third base with still one out in the inning. Two more runs were scored that inning, making the score 5-3 and effectively ending the game.The Royals came back again, now one game away from a World Series title.

Game 5: Eric Hosmer’s Double (Royals) Game 5 was potentially the last game for the Mets, and as a result, they played with a sudden fire in their eyes. The Mets entered the ninth inning leading 2-0, and they were in good position to win the game. The Royals managed to get one person on base with two outs, and Eric Hosmer came to bat. The Mets starting pitcher, Matt Harvey, was looking to finish the game that he started, but Hosmer had other ideas. He hit a triple that scored the runner while putting him at third base. Then, he became only the fifth person in MLB Postseason history to steal home plate off a wild pitch, which tied the game at 2-2. The game went to extra innings again, and this time, the Royals scored five runs in the top of the 12th inning, solidifying their place as World Series champions.