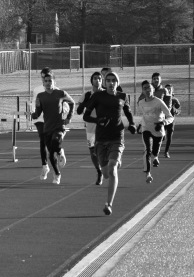 The boys track team runs an 800m in preparation for their meet.

Running through the bitter cold and feeling the wind whip against your face is not an activity that would attract most people. Rather, the idea of running on slippery, black ice with numb feet would send shivers down most people’s spines. Despite these harsh conditions, the JP Stevens winter track team perseveres through them every winter, and this year is no exception.

To attain success as a whole, the the team pursues three things: speed, stamina, and strength. Head Coach Martinez and Assistant Coach Allen serve as excellent motivators who regularly implement new workouts into the team’s routine. For example, on a single day, the girls either run eighteen 200 meter repeats for a speed workout or between four to six miles for their distance workout. Additionally, the throwing squad trains in the weight room to strengthen their arm muscles, and the sprinters focus on short distance workouts, running sprint medleys that require immense amounts of perseverance.

To stay motivated through the frigid weather, the team requires more than just layers of thermal sports attire: Aneesh Deshpande (12) explains, “The cold affects my running by making it harder to breathe; generally when it is cold there’s less oxygen in the air. A lot of the time there’s a lot of snow and ice on the ground, so we have to make sure we don’t slip; but, through all this we become tougher runners.” In the biting cold, the runners also look to cultivate team spirit to warm their souls. Captain Zoeb Mohammedshah (12) admires “how hard [his] teammates work, and how much [each practice] will help for races,” and uses their dedication to keep himself similarly motivated and mentally focused. Also proud of the team, Coach Martinez remarks that “for most of our runners that [motivation] is intrinsic.” He continues, “They want to come out, face adversity, and get better every day.” The runners continually prove that they are willing to face the difficulties and improve everyday to reach unprecedented heights.

Evidently, the team achieved those heights last winter season when Captain Aaron John (12) made the Meet of Champions, placing fourth in the state. With a time of 1:56.70, Aaron made JP Stevens history. He comments, “I’m very particular about my training routine because I think it’s important to not only work hard but also work smart. I try to maintain a daily training schedule so that I can be consistent, but I also continue to push myself to improve.” This season he continues to be a role model, motivated by the thought of seeing his hard work pay off.

The girls on the winter track team are just as relentless when it comes to battling the snow. Although they lost several seniors last year, the advent of many motivated freshman has kept the team solid. Angela Cao (10) is pleased that the distance team is comprised mainly of underclassmen, stating that the novelty of the team has allowed them “to create new pilates routines as well as integrate barefoot-strides into [their] after-run routine.” The group of 24 girls is close-knit: they have many team rituals including Cookie Monday (on Mondays one teammate brings cookies for the whole team to give the girls have plenty of energy and motivation to start the week off strong). Such camaraderie keeps the team enthusiastic and optimistic. As captain Jamina Morris (12) puts it, “the track team and the family feeling we get is what inspires me to come to practice every day.”

Pushing through the harsh weather, the girls’ rigorous exercises are a good indication of a successful season and GMC tournament. As they gear up for the GMCs, Coach Martinez comments, “We want to be a complete team that is competitive in the field and on the track in both the distance, sprints and hurdles. We think we can score in the Distance Medley and Shuttle Hurdles in the county on both teams.” Although the weather worsens, the team gets tougher under the leadership of determined and experienced captains who will stop at nothing to break records and write their names in the history books.